On your own Smartphone 100% Flexible: whithout touristguide & appointment Corona-konform
Already have a key? Start you game here

1-30
120 minutes
Only on YourCitquest
The emblem of the modern Federal Republic is in danger. Find all the clues in time as disguised investigators, save the Olympic Park and be rewarded with the best view over Munich!

Also available as a gift voucher!
Cancel within 30 days after purchase.

SAVE A PLACE IN THE INVESTIGATORS' TEAM NOW!

The Olympic Park, the emblem of the modern Federal Republic, is in danger. The impressive park's gyms and towers are overshadowed by an imminent danger that must be stopped. You are the undercover investigators on site and must follow up on clues from the police control centre. Gather enough information at the scene and prevent the worst from happening. Then you will be rewarded twice: with the most impressive view of the most beautiful - and now again safest - city in the world.

Did you know that Munich has its own "Walk of Fame", or that the most famous mountain is actually a big pile of rubbish? The tour includes interesting facts about the history and hidden corners of the Olympic Park.

While solving an exciting case, you'll spend unforgettable hours in front of the city's most impressive scenery. Our "crime scenes" include the BMW World, the Olympic Stadium and the famous Olympic Tower. And of course many more hidden and otherwise unknown places. (*CORONA note*: The buildings mentioned do not have to be accessed to solve the puzzles.)

In addition, there are always tips for the best photo spots at the park provided by local photographers.

With this game code, a maximum of 5 people can take part in the rally. You are a larger team? Then simply book several game codes - then you all can participate and puzzle together!

You can get to the starting spot in a relaxed way by taking the underground U3 or U8. The game begins right at the Olympiazentrum station. 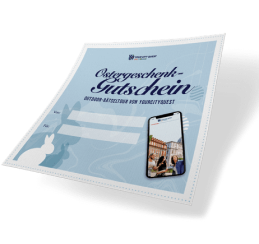 • Voucher is sent automatically with every order!

Or you´ll get the money back!

No matter for what reason you want to cancel the order:
You will receive a 100% refund of the purchase price.

(* valid for the first 30 days from purchase)